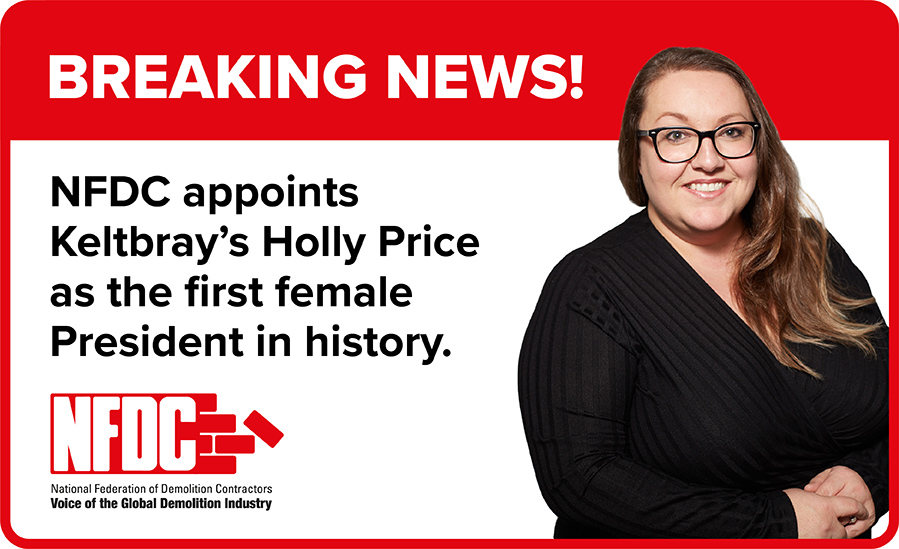 The National Federation of Demolition Contractors are delighted to announce the appointment of Holly Price in the role of President at the NFDC. It is a significant appointment that will stand out in NFDC history, as Holly becomes the first female President of the Federation since its establishment 78 years ago.

Holly receives the traditional Chain of Office from immediate past President, David Keane, at the organisation’s AGM, taking place today at Rosewood, London.

With the former Vice President, Martin O’Donnell, being unable to take up Presidential duties due to  changes within his organisation that contravene the long-standing NFDC 2005 ‘Articles of Association’, Holly steps up to the position of President earlier than anticipated – yet she is more than ready for the challenge ahead.

Holly will be well supported by William Crooks in the role of Vice President and 2nd Vice Gary Bishop. The entire Federation Membership is keen to experience the undoubtedly positive contributions that straight-talking Holly will make over her two year term in the Presidential role.

Having served as Chairman of the NFDC’s London & Southern Member Region and 2nd Vice President of the NFDC, as well as being a full time Training & Development Director at Keltbray Ltd, Holly has already made a significant impact on Federation priorities and demonstrated great dedication to her NFDC operational duties.

With a down-to-earth personable style, a shrewd mind and a wealth of industry experience, Holly has unsurprisingly made the headlines over the years – not least for becoming the first female explosives engineer in the UK and Europe and for pioneering industry initiatives in health, safety and wellbeing.

Holly is an outstanding role model for anyone considering a career in demolition and/or the wider construction industry. She actively promotes the need to widen the talent pool by embracing diversity and attracting newcomers from all backgrounds to the industry, and she tirelessly campaigns for continuous improvement of industry standards.

With proven leadership skills and a sound knowledge of the nuances of the Federation structure, Holly is well equipped for success in her role as President. She adds a new dimension to the NFDC and we look forward to the fresh thinking, energy and passion that she will bring to the Federation.

The NFDC community congratulate Holly on her appointment and wholeheartedly support her efforts going forward.