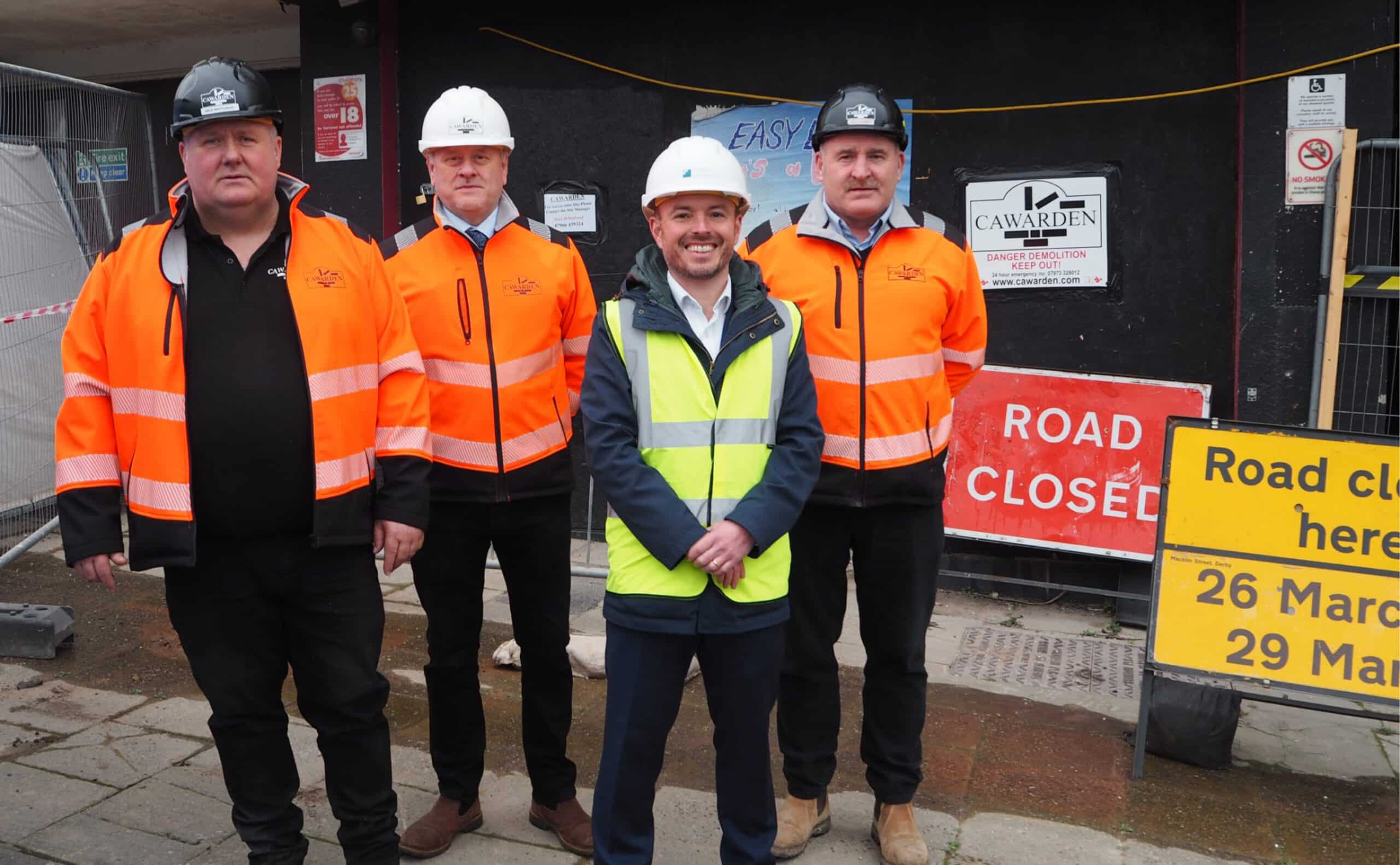 Derby-based Cawarden have been appointed demolition contractors for the project and have started preparing for the structural demolition work on the site of the former Pink Coconut nightclub, NCP car park, Padley House, and Dubrek Studios.

Demolition of the former Debenhams store, which occupies part of the Becketwell site, was completed by Cawarden in Summer 2020, followed by the former Central United Reformed Church and properties on Victoria Street in March 2021.

A soft strip of the interior of the Pink Coconut is currently underway to segregate the building’s contents. It is anticipated that as much as 95% of the fixtures and fittings will be recycled.

Scaffolding is set to be erected shortly, followed by the commencement of the robotic demolition of the first three stories, which will be taken down floor by floor.

Cawarden’s specialist high-reach demolition machine will arrive on site in June/July to start the structural demolition of the existing buildings, including the Pink Coconut which was an iconic venue in the 1980s and 1990s.

Asbestos removal works are also taking place. Strict noise, dust and vibration monitoring and environmental controls will be in place to minimise the impact of the works on surrounding properties and businesses.

Final clearance of the site including erection of the perimeter hoarding for redevelopment is set to finish in the Autumn.

This latest phase of demolition will clear the way for the most significant development project in Derby city centre since the Westfield Centre in 2007.

Work on phase one of the scheme is currently underway, with the construction of 259 one and two-bedroom apartments on the site of the former Debenhams store on Victoria Street.  The centrepiece of the development will be a multi-purpose public square, which will also be delivered as part of the first phase, with completion scheduled for Spring 2023.

The performance venue, which will be delivered as part of phase two of the scheme, will be owned by Derby City Council and managed by ASM Global, who are the world’s leading venue management and services company.

The venue is expected to add a much-needed new venue to Derby’s cultural offer. The purpose-built venue will be a fully flexible, scalable space capable of staging a range of concerts, stand-up comedy, family shows, musical theatre, conferences, and exhibitions.

The main auditorium will have a maximum capacity of 3,500 and offer a range of different event configurations including a fully seated layout for up to 2,100. Along with a busy concert and entertainment programme, the venue will also host a wide range of business events.

The venue is set to host more than 200 cultural and commercial events each year and attract an additional 250,000 visitors to Derby. It is also expected to create 200 new local jobs, generate more than £10m per year for the area and provide the impetus to kick-start further investment in surrounding areas of the city centre.

Construction on the performance venue is set to commence in January 2023, with completion and handover to the operator in late 2024.

“It’s great to see work start on phase two of the Becketwell regeneration scheme, which is set to create an exciting and vibrant city centre, where people will want to live, work and enjoy their leisure time.

“Cawarden is a well-known local specialist contractor whose team are familiar with the site, having already demolished the former Debenhams store and Central United Reformed Church.

“Our programme currently remains on track, with construction work on the performance venue set to commence in January 2023, with completion and handover to ASM Global in late 2024.

“We have already successfully completed the demolition of the former Debenhams building and the church next door and look forward to delivering another key milestone in preparing the site for the much-needed Becketwell regeneration scheme.

“Given the proximity to other structures and live areas, we will be putting robust environmental controls and strict monitoring measures into place. This includes the use of our high-reach dust suppression system, that captures dust at source, preventing any significant nuisance.”

“As a local specialist contractor, we’re proud to be helping to bring these exciting regeneration plans for our home city to life and playing a part in the Becketwell regeneration scheme.”

Future planned phases of the scheme include the potential for a range of other complementary uses of the site including new grade A offices and commercial space, a hotel and a multi-storey car park and purpose-built student residential.

Funding for the Becketwell project includes £8 million in Local Growth Fund investment from the D2N2 Local Enterprise Partnership, the private sector-led partnership of business, local authorities, skills and training providers and community and voluntary services which works to promote economic and jobs growth across Derby, Derbyshire, Nottingham, and Nottinghamshire.

St James Securities have completed many successful projects of this scale, including St Paul’s Place in Sheffield and the award-winning Round Foundry in Leeds.

A family-owned and operated specialist contractor with over 35 years’ experience in delivering exemplary projects.

Cawarden honoured with Green World Ambassador status 2022 at a special ceremony in London.